Since childhood I have an enormous love for animals. I have had pets all my life which include dogs, parrots, pigeons, rabbits, fish, and even cows. Currently I have two cows, two rescued dogs and more than 40 pigeons. With time I have realized that there has been no greater feeling in the world than saving a life even if it’s one at a time.
I was born and brought up in Bhopal, MP and I have loved animals since the day I was born. My brother calls me a naturalist as I have always felt a strong connection with nature and animals. People say that they cannot imagine their world without their phones or Wi-Fi connection but if someone asks me I would say that I cannot imagine a world without animals. For me the life of any other creature is as much important as the life of a human being. People need to understand that animals also feel loneliness, they also get hurt.
Once I rescued three dogs and five puppies from a horrible lady who used to beat them daily with a cane. I tried to seek help from other members of my society but nobody came forward to rescue them. After one or two weeks, I got a number of a lady who helps in rescuing dogs so I immediately called her. I still remember the day when the rescue team arrived. The owner of the dogs was not in the town and she had locked her dogs inside her house. It was very difficult to rescue them so we had to call the police.
The condition in which the dogs were found was horrifying. The puppies were infected; one of the dogs’ hind legs was fractured due to the beating. My heart was beyond broken after watching them. After recuing them, we found a safe foster home for them and then found their forever homes. From that day forth, I went on to save many more.
Timtim is our first adopted dog. We found her covered in ticks, her eyes were infected, and she was so little that she couldn’t even walk properly. At first we thought she won’t survive but she is a fighter. Timtim is now three years old who loves belly rubs. Like Timtim, we found Kaalu three years back in a terrible condition. Kaalu was a stray dog in our colony. He used to bark at my father and brother and won’t allow them to enter the premises. My mom was not fond of dogs at that time. The irony was that apart from me everyone in my family despised him for his behavior.
One October I found Kaalu unconscious in front of my house. My father immediately called a vet and he told us that Kaalu had severe pneumonia and that there was very little chance of his survival. I remember that night I couldn’t sleep. Next day, we tried to feed him but he didn’t eat for two days but due to some reason he stopped walking. We soon came to realize that he was suffering from a sudden paralysis may be a spinal stroke. From the next two months, my father and I used to carry him to the hospital every morning where the vet used to inject some fluids into his body. It was a tough time for us as we were not getting any results. One of our neighbors asked us to poison him. My heart just stopped! I didn’t go to college that day as I was afraid that someone might hurt Kaalu.
Long story short, after two months and thirty injections later, we noticed a slight body moment. I made a homemade sling from a bath towel to help him stand and with some exercise Kaalu gradually began to walk. I still remember the day when he tried to run for the first time and my mother couldn’t hold back her tears. Since that day he has been sleeping and eating at our home and he has become my mother’s favorite. Seeing him play and run is the greatest feeling in the world to me.
Raising a dog can be easy but raising three pigeons with neurological disorder is not an easy task. These pigeons might look normal to others but trust me they are not. In 2015, my father found a baby pigeon in his office so he brought it to our house. We noticed that like other pigeons, it was not eating rather it was going around in circles. We found it very strange and after doing some research my father found out that the baby pigeon was suffering from a neurological disorder. We tried to cure this disorder but soon we realized that it cannot be cured. I decided that I will not let it die.
I named it Boju (I know it sounds funny). Since that day I have been feeding Boju two times a day and just like any other pigeon he loves doing happy dance and purring. After Boju, we rescued Piku from a butcher who also has the same neurological disorder but he is doing fine. Both Boju and Piku are best friends. It is important to understand the importance of caring for a pet. I don’t remember the names of my subjects but I remember all the names of multi-vitamins and medicines of my pets.
I feel God has blessed me with this opportunity to save the lives of helpless animals. From placing earthen pot with fresh water in our balcony to feeding a stray, we all can contribute to saving lives. 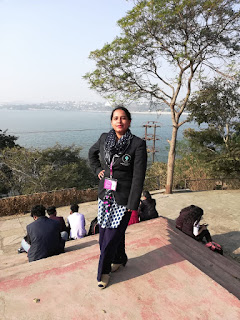 Ayushi Sharma is a former literature student who is currently pursuing B.Ed from BSSS College, Bhopal. She’s the pet parent of two rescued dogs and nurtures more than forty pigeons. She loves gardening but her favorite job is feeding the strays. Ayushi is an avid reader but when she is not reading, she's probably dancing, watching Game of Thrones and FRIENDS, or dreaming of Mr Darcy.