The Flattering Fauna of Banasthali University: A Student's Review


The Flattering Fauna of Banasthali University:

Banasthali University or Banasthali Vidyapeeth is a women only, deemed university established in 1935 by Rajasthan's first chief minister, Pandit Hiralal Shastri. Lovingly known as Apaji; he,his wife, Ratan and daughter, Shanta dedicated their lives to rural reconstruction in Banasthali, a town in Tonk district, near Niwai approximately 72kms southwest of Jaipur. Here, Apaji and Shantabai handcrafted an educational institute for women, brick by brick initially known as ' Jeevan Kutir' that today provides affordable education to girls from provinces with little or less educational opportunities. Unfortunately, Shantabai passed away at the mere age of 12 but her mission lives on, as myriads of Shantas are trained to pass the legacy to the next Shantas.

Today, one simply has to book a train ticket to Banasthali-Niwai railway station or take a Rajasthan roadways bus from Jaipur bus stand to reach the university brimming with female students right from class one to PhD. It's a fully residential university where students and the entire staff live either on campus or in the surrounding villages. I do not need to elaborate on the empowerment it provides to the villagers who work for the sustainment of the university's day to day life in the form of cooking, cleaning, chauffeuring and commercializing.

I had gone to study M.A in English Literature there on the whims of my parents who wanted me to study in a secured campus. I had continued my studies there till M. Phil in English Language Teaching and had thus stayed from 2011 to 2014 (2 years of post graduation and 1 year of M.Phil). Being an independent wanderlust and a tomboy, I hated my being bound there amidst girls gangs, strict uniform codes (khadi overalls), curfew timings, network jammers, cell phone ban and a ton of other restrictions. They even checked the parcels I received from friends, parents as well as shopping websites and criticized everything as if we were set in an Indian sans-bahu serial. During the limited landline phone privileges, when my parents called, I would ask them what I had done wrong to be put in a place where I didn't fit. Thus, I spent more time cooped up in the vast library or exercising in the sports ground and taking part in the various competitions being organized all round the year than with my jealous batchmates.

Language studies isn't the strongest discipline in the university and we suffered from the departing and reshuffling of faculties, zero exposure to our field, (visits to Jaipur Literature Fest was banned due to some girls running away), limited career advice and placements. But we had visitors from 'the west' from time to time who enlightened us about certain subjects such as creative writing. The most enjoyable however was amazing open-air movie experiences ( that I called 'Gandhiji ki Dhoti' due to the movies being screened on a big white sheet) and absolutely fascinating fauna and flora.


The campus has a remotely located marshy area called ‘ Brahm Mandir’ where Apaji and other members of his family are commemorated, surrounded by stunning sunrises. Parakeets are always packed on the neem trees lining the entire campus to apparently reverse desertification, little sparrows build nests in our hostel corridors and peacocks and crows call from the rooftops. My escape was this marsh where trees of karanda grew abundantly and I could pluck as many as I could till the thorns tore through my skin. I would walk the entire length of the campus (3kms approximately from the main gate to the back gate) and satisfy the photographer in me by clicking away at the squirrels kissing each other, myna birds bickering on branches etc. 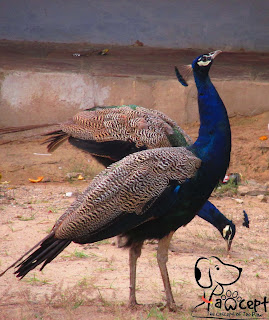 I wish I could say I had the best days of my life here but sadly I didn't. They don't have good doctors in the hospital who can detect a simple fracture, but upon further complaint, a warden accompanied me to a medical facility in Jaipur and helped me with the necessary treatment. We had insensitive faculties in our department who were biased towards certain students but then there were other faculties who sat extra hours with me when I couldn't fathom certain aspects of my dissertation. We had restrictions on going home alone or relatives visiting us but when my mother visited me, she didn't have to pay anything extra for her lodging or food. Yes, some girls were horrible with me, to the extent they formed groups to bully me but I forged lifelong friendships with others.

So, despite the fact that I was admitted reluctantly, my sojourn in the university turned out to be a hate-love relationship filled with a mixed bag of experiences. Hence the moral being, it's your demeanor and outlook that shape you and your future and not the university. But if you want an escape to a study hub like our princes of the old, learning life skills in the midst of wilderness, this may very well be the place for you.