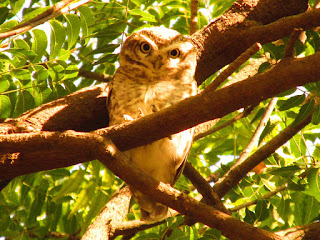 I remember living in a place, where there were birds like me and they all howled and flew around and they never liked to stay for long.

Then the one with flowers gave me toast and I don't think about it anymore.

I didn't meet the one with flowers, first, I met a pale one first. I remember sitting on the branch of a tree, feeling bored. The pale one smiled at me, and he talked to me. He asked me if I was a nice bird I said yes, but I was rudely interrupted by the smiling one. The smiling one said something else and the pale one poked on my head. I liked the pale one. For some reason, I liked him.

But he put me into a prison and the world was fragmented with bars, and he took me away from darkness, the howling into an entirely new world. It was so bright, so much noise, and so many big things walking around in their almost repulsive bright world.

I was mortified. For some time I felt that my fate was nothing, but an owl even has to endure all this, that I would be caged forever, unable to spread my wings across, unable to soar. I had resigned myself to the bars and the cramped space, sitting with the pale one. He brought me up a flight of stairs, and I thought nothing of it.

I think I was told of it once, the funny little thing called love. Someone told me about it, but I don't recall if it really existed. As I found out that day, love is a thing that exists and it is very strange and powerful.

I liked the pale one, but when I saw the one with flowers I felt something, something strange and new, and oddly exciting. She smiled at me and I wanted to stay with her forever. She took me out of the cage, and allowed me to wander freely, it was for the first time i relied on the word love, that mythical thing that was very much real and I felt it for the one with flowers.

Once or twice I  have heard her cry and it scares me, more than the cage ever did. For someone who smiles so much, who likes flowers, and the sky and me, a simple barn owl with an odd name, she should not be crying. But I have seen her crying and even seen her waking up terrified. I have seen this too many times and now this is my greatest fear, not the cage.

But when she smiles I remember that everything is gonna be alright, and she will not be scared all the time, and when she gives me little flower crowns I wish my beak would stretch so I could smile at her, and when she shows me the letters she values so much, i remember that whatever haunts her in her head can leave and that as I put the letter in my beak, or wear the little flower crown, I am helping her drive the bad days away.

I am an owl, I am a friend. I am a good little bird just like the one with flowers tells me i am: and I think I believe her.

April 29, 2020
Diary of an Animal Lover Ayushi Sharma Since childhood I have an enormous love for animals. I have had pets all my life which include dogs, parrots, pigeons, rabbits, fish, and even cows. Currently I have two cows, two rescued dogs and more than 40 pigeons. With time I have realized that there has been no greater feeling in the world than saving a life even if it’s one at a time. I was born and brought up in Bhopal, MP and I have loved animals since the day I was born. My brother calls me a naturalist as I have always felt a strong connection with nature and animals. People say that they cannot imagine their world without their phones or Wi-Fi connection but if someone asks me I would say that I cannot imagine a world without animals. For me the life of any other creature is as much important as the life of a human being. People need to understand that animals also feel loneliness, they also get hurt. Once I rescued three dogs and five puppies from a horrible lady who used
21 comments
Read more

September 13, 2020
For some of us recovering from the Covid scare amidst reopening of offices, reeling from the maddening media frenzy and the crashing democracy; the pages of utopian children's literature bring some much needed relief. The canon of children's literature penned by the legendary Roald Dahl has so much fantasy that too rising from difficult times that just like writers of romantic era, it's easy to just lean back on the magical weaponry to escape today's problems. Given the current scenario of the world or the times in general, frequent sojourns into the fantasy world with mystics animal hero's of Dahl won't hurt, in fact it would just uplift one's moods. On Roald Dahl's 104th birth anniversary, we celebrate the creator of mythical and charismatic animals that still charm the young and the old alike by peeking into the adventures of 4 of his inspiring fantasy creatures. After all, what better way to be carefree kids again than with mystical animal heros
2 comments
Read more