October 06, 2019
Animals Mounts (Vahanas) of the Shiva Clan
( Durga Puja special)
Meghna 'Phoenix' Ghatak
It's widely popular that Lord Shiva's bull Nandi represents eternal waiting to some, strength and vitality to others. His lesser known companion, a cobra, represents the ability to be alert and inert at the same time, through its hood, for spiritual ascension.
A God's mount basically symbolizes an animal or mythical entity as their vehicles or sidekicks. Sometimes Gods also reign over the negative aspects represented by their mounts or vahanas as in Lord Shani, the god of justice crushes the thieving tendencies of his mount crow/vulture.
Since, it was only after the Gupta period or 5th century AD that written documents began to be read by the general public, they had to explain stories through symbols. Even gods didn't have the figurines that we are familiar with today and were represented through inscriptions . Symbols such as the Bodhi tree for the spiritually awakened Buddha and chariot for the stories before his awakening, were used to narrate tales from Jatak katha and have been found on the stupas in Sanchi. 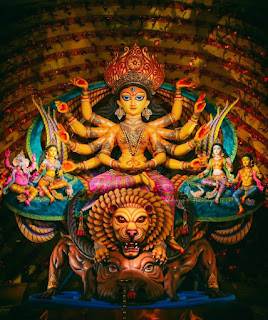 This Durga Puja, let's decode the symbolism behind the vahanas of Goddess Durga and her two sons and two daughters who are visiting us, during her yearly descent, this monsoony October.
Goddess Durga was given a lion by her father Himavat, the Lord embodiment of the Himalayas when she was chosen to fight Mahishaasur, the demon who could only be killed by a woman. While the lion (tiger in some depictions), is a symbol of strength and power, she also reigns over the animal's arrogance for being a supreme being.  By association with such a revered deity, her followers are also reminded to conserve the animal who is seen co endeavoring to kill the demon who is disguised as a buffalo.
Her daughter/sister/another form, Saraswati who is the goddess of wisdom, seen as the consort of Lord Brahma - the creator (for to create, one needs wisdom), has a swan or goose (hamsa). The swan has the unique ability to separate milk or elixir from water hence one should be able to separate out knowledge from utter rubbish to fly above the quotidian, towards spiritual attainment. It is a pure bird, whose feathers remain dry while swimming and they mate for life.  It's their undying sense of attachment to worldly possessions that the goddess stands to purge since it hinders in the path to break free from the cycle of karma and life.
Laxmi, the goddess of wealth, the consort of Lord Vishnu - sustainer of the universe ( one needs wealth to sustain oneself), has a white owl as her vahana. The wise owl preys on rats that reduce the produce of the agricultural community after using patient observation and stealth. Since working hard alone cannot guarantee money, one has to be tactical and that's where the now rare white barn owl stands as a symbol to attain wealth. Unfortunately, many people assume it's perch above their house as a bad omen  and attempt to domesticate them or kill them, leading to their near extinction. The goddesses reigns over the birds' blindness during the day as one needs to let the light of wisdom enter to spend the earned wealth wisely.
Kartikeya the handsome Lord of war, also known as Skanda, Kumar, Murugan etc in different parts of India, rides a peacock called Paravani. Originally, a demon called Surapadman who was split into two to be transformed into a peacock and a rooster from a mango tree form. While the rooster became his emblem, the vain glorious peacock, quick to travel around the world, became his mount. He would swiftly deliver his father's messages across the universe and once in a competition against his younger brother, flies thrice around the universe on his peacock. Many people wrongly believe that since peacocks don't copulate and remain chaste, are supposed to be the embodiment of a warrior that is, a bachelor. The Lord however presides over his mount's pride over being strikingly handsome.
Ganesh, the elephant headed remover of obstacles,  has a little mouse as his mount, aptly named Mushaka. A celestial singer cursed to become a mouse and then stopped from creating havoc at the abode of a sage by the Lord, the little mouse transforms into his devotees' inbox. He was made the Lord's mount after little Ganesh naughtily requested for one like a mouse and broke the meditative trance of Lord Shiva. The mouse is a symbol of restless mind driven by uncontrollable desires selfishly that is controlled by the Lord seated above him to crush these qualities.
There are other animals associated with the plethora of Shiva's family and only the most popular depictions have been mentioned here. However, they are the favorite of the populace frequenting the various statues built to celebrate her annual return to our abode. This Durga Ashtami, let us not only celebrate the spirit these mounts embody but also save them from eminent endangerment and extinction at the hands of vain poachers.

April 29, 2020
Diary of an Animal Lover Ayushi Sharma Since childhood I have an enormous love for animals. I have had pets all my life which include dogs, parrots, pigeons, rabbits, fish, and even cows. Currently I have two cows, two rescued dogs and more than 40 pigeons. With time I have realized that there has been no greater feeling in the world than saving a life even if it’s one at a time. I was born and brought up in Bhopal, MP and I have loved animals since the day I was born. My brother calls me a naturalist as I have always felt a strong connection with nature and animals. People say that they cannot imagine their world without their phones or Wi-Fi connection but if someone asks me I would say that I cannot imagine a world without animals. For me the life of any other creature is as much important as the life of a human being. People need to understand that animals also feel loneliness, they also get hurt. Once I rescued three dogs and five puppies from a horrible lady who used
22 comments
Read more

September 13, 2020
For some of us recovering from the Covid scare amidst reopening of offices, reeling from the maddening media frenzy and the crashing democracy; the pages of utopian children's literature bring some much needed relief. The canon of children's literature penned by the legendary Roald Dahl has so much fantasy that too rising from difficult times that just like writers of romantic era, it's easy to just lean back on the magical weaponry to escape today's problems. Given the current scenario of the world or the times in general, frequent sojourns into the fantasy world with mystics animal hero's of Dahl won't hurt, in fact it would just uplift one's moods. On Roald Dahl's 104th birth anniversary, we celebrate the creator of mythical and charismatic animals that still charm the young and the old alike by peeking into the adventures of 4 of his inspiring fantasy creatures. After all, what better way to be carefree kids again than with mystical animal heros
4 comments
Read more