It’s always hard to accept the fact that a beloved pooch is no more wagging his/her tail in your welcome or that a wet nose butt at six in the morning is suddenly unavailable. The day afters with their deafening silence are the hardest to bear for all pet parents, especially if the beloved dog was an only pet.


My little girl, a yellow Labrador retriever with silver crescents on her back, was taken from us abruptly on 12th April, 2018. I had named her after the moon goddess, Luna; due to the presence of the silver crescents on her back and had hoped that her namesake would affect her temperament.  In the seventeen months of her life with us, she had actually become the moon, revolving around us and influencing our time and tide. 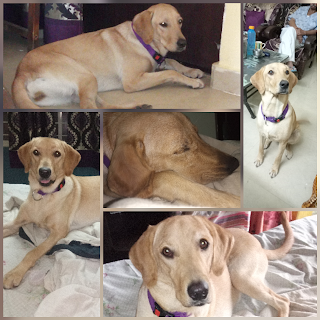 She was much cared for by my parents as well who were initially reluctant to her being in the house. She was our second dog whom I had brought home on one Christmas Eve; two months after my previous dog had passed away.
Luna grew up so fast that it was unbelievable. I had a strong suspicion that my previous dog was poisoned and hence was determined to keep my new girl off limits of the people in the vicinity. Thus she grew up timid and clingy and extremely obedient.
Luna was so obedient that she could easily walk without her lease and submitted to no one’s beck and call except her mistress. People in the vicinity did not like her independence and frequently chastised me for her behavior of following me around that scared their kids. I argued that she did not even touch or sniff anyone, and that she wasn’t to be blamed for mothers scaring their kids with stories of dog bites.
On the fateful day of 10th April, after her weekly bath, Luna refused food and lapped only at water. We assumed that we had overfed her and assumed our daily routine. But she did not resume eating and the water she drank from would turn slimy and dark. I paid her vet a visit who after checkup told us that she was suffering from a high fever and administered injections and paracetamol drips. We were running hither skitter at the whims of the vet’s busy schedule and unavailable medicines. In the passing few days I realized that there were more liquor shops open 24x7 than medical stores. By 12th April, we were sleeplessly, tirelessly trying to decrease her temperature by giving her ice packs and forcibly feeding her but to no avail. She was so weak, the water she drank from turned greenish black, her mouth was black and rigor mortis was already settling in.
At noon, she took her last breath in my lap and my family watched on helplessly, cursing the vet who couldn’t give her time enough. Blinking away tears, I gave her CPR learnt from movies, desperately attempting to restore her heart beat. While I was at it for over an hour, my friends poured in, pulled me aside and conducted her last rites.
For days after her passing, I assumed I could hear her footsteps on the tiled floors and would sometimes hear her breath by our feet. I had terrible nightmares about her roaming the house, looking like a zombie and had a nagging guilt feeling that I hadn’t done enough to save her. Two simultaneous deaths were too much to bear, let alone the nightmares and the self chastising.
Indian culture doesn’t have a ritual for bidding farewell to animals, so I summoned a local pandit to conduct a Satyanarayan Katha for cleansing the house of negative energies. The pandit advised us to plant a Tulsi to curb any negative energy that had taken our beloved dogs away, which we did right away. Well wishers remarked that the dogs must have taken upon themselves any harm that must have been supposed to fall upon my family. We all had a brief respite in developing a new hobby of gardening that counselors suggested was a tested therapy to cope up with pain.
Almost a year on, the nightmares still continue, the Tulsi plant had grown proportionately, leading us to believe that Luna too was poisoned. Many of the dogs I fed in the colony were reported dead through poisoning around the same time and we postulated that someone knowingly or unknowingly had fed her something poisonous. We couldn’t prove anything and hence we could only speculate, boil our blood in anger. I was never allowed to bring or rescue any other dogs again.
A miracle happened though. Every time I would miss her or feel the need for her silent reassurance, I would find her hair around me or on my bodice. I began finding one single radiant hair on my desks, my car, laptop and sometimes on tables and beds beside me in out of town places. It wasn’t unusual; I would try to reason with myself, as my clothes must contain the strands in their deep seated orifices that would find its way around my presence. It was reassuring to imagine her looking out for me from over the rainbow bridge.  Hence every time I had a nightmare about her death, I would wake up and scroll through the happy pictures of our sojourn together.
There were moments when I would get jealous of other people's pets living up to ripe old age and be angry on people who mistreated their pets or streeties. Hence, I would spend spare moments feeding and playing with indie dogs in my neighborhood and within days, scores of them politely gathered around and obeyed commands of ‘sit’ and ‘stay’.  I would caress them and they would walk with me to my abode and squat outside for a while. They began to treat me like their alpha and behaved like my personal body guards. Once when I was standing outside my house, a man unknown to me was staring at me and all the neighboring dogs jumped out of their hiding places and scared him away. Then they all proceeded to shower me with their affection.
The grief of loosing beloved pets will never go away and replacing them with new ones may or may not be the solution.  But distributing love to a thousand homeless ones, advocating for the injured ones, providing aide for the ill might help one ease with the pain.  At least that is what keeps me going…