It's not just uncommon but also inconvenient to find animals parked on our Indian roads resulting in an incongruent flow of traffic. The morning and evening rush hour commutes are made all the more dramatic due to long bovine cues traveling to some grassy office lazily. There will always be dogs traumatized by speeding wheels crushing their pack members, aggressively chasing after one's two/four wheeler, scaring the driver. 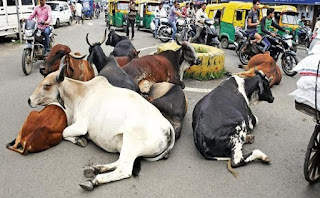 As small cities across India are mushrooming with work opportunities, qualified employees from bigger and smaller cities alike are keeping the traffic flowing. With this boom in population in the small cities, a sudden scarcity of driving and parking space has occurred. Very few modern parking solutions have been implemented by the government so far and that too in limited areas, hence drivers retort to littering the streets with their vehicles. Some unforgivably unconscious vehicle drivers park disruptively and elevate the blood pressure of others passing through, at times causing accidents. Sadly, few police and traffic personnel are present in such situations to manage the human or animal traffic rule violators.


So the question arises, if we are in the wrong for blaming the bovine and strays loitering and parking themselves amidst the busy traffic or not. A proverb has recently resurfaced repeatedly due to environmental concerns and it rightly states,


We have been taught since childhood about being the supreme entities on the planet, thus we assume that the deer is wrongly crossing the road. If we have been bestowed with the gift of consciousness, which makes us supreme, then shouldn't we ensure that the deer crosses the road, instead of unconsciously killing or blaming them for being on the road? Can we at least honk appropriately and stop cautiously, warning other drivers of any intermittent animal pedestrians? This will avoid any unwarranted post traumatic stress disorder to stray and wild animals who gather around their brutality killed mates and out of grief attack bystanders and passing vehicles. Many reports of dogs, buffaloes, cows, tigers and leopards attacking samaritans and passersby equally have surfaced from small towns and cities pan-India after members of their packs became roadkill. Many a times, during my usual commute to and fro from work, I cringe and count their numbers I alarmingly find on roads passing by woodlands and wetlands. 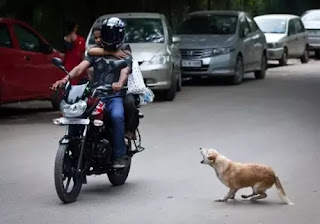 During the rainy season, when the muddy stretches of the roads become runny pools, cows park themselves on the tar/concrete areas warmed by tire friction and ruminate. Dogs curl up against them or precariously between road dividers while white cranes land on their backs and peck on the insects feeding on their posteriors. These cows act as road dividers and speed breakers when there are none on the streets, deflecting the traffic; adding to the grief of the average Indian driver juggling between the controls of his/her vehicles,  the reckless speeders and the potholes on the road. Since a lot of hue and cry has already been raised against the killing of cows, bovine grazers either refuse to move their hayward animals or scare them into a running spree creating further problems on the roads.
It pains me to spot stinking carcasses on state and  national highways, being plastered continuously by the unconsciously racing vehicles, killing other hungry scavengers attempting to feed on the remaining roadkill. They also serve as traffic deflectors when the drivers spot them on time and the rest follow their lead. I once had nightmares for days upon spotting a dead cat with an awfully agonized expression, shoved aside from the main road.
Enough has already been said about building hospitals and sheds for the bovine, shelters and sterilization drives for strays, smart roads for endangered animal crossings but not much has been actively done. Many governmental and nongovernmental organizations are effectively working round the clock for improving the situations but it's still not enough mostly due to lack of proper funds and stricter laws against corrupt officials. Hence, it's time to cancel the 'All India Permit' for animals parking in the midst of busy roads and to provide alternative space that they can rightfully call their own, so that roads can fulfill their sole purpose - facilitating the human traffic.